She wanted to see a post about me and Subvet..with pictures. Seeing as how I've had 3 babies in 3.5 years, you can imagine that I am not pleased with my current appearance. However, I will succumb to peer pressure, after all, "all the cool blogs are doing it" as they say.

Today Subvet and I celebrated our 8th wedding anniversary. We were married 7/17/99 at the Dallas Arboretum. Yup, that's me all over, an outside wedding in the BUTT MIDDLE of a Texas summer. Poor Subvet almost melted in his tux before all was said and done. It was a simple wedding, there were 11 of us there. That's counting me, Subby and the preacher. We went to Walt Disney World for a week's honeymoon and then 2 weeks after the wedding we had the reception with about 75 or so attending. I planned and executed the whole thing. The only thing that I remember Subby having input on was the groom's cake. He wanted "We're Legal!!" put on it. So I did. ;-) (We'd lived together for a year before getting hitched) As I don't have a scanner you can't see wedding pics (darn shame too, they are GOOD!)

I have to tell you that last night was hard for me. Subvet works odd hours and he was gone from early evening till early morning this morning. Knowing that he'd be working on our actual anniversary and this was going to be our celebration somehow made his absence harder. I had a lot of time to think about our marriage and kids and life in general. It's hard to remember what things were like 8 years ago. Our life now is mostly caught up in taking care of the kids and working with our 2 delayed sons. But I do know this. I love that man. More than he will ever understand. He is the one that I can lean on, the one that I go to for everything from life advice to broken toys. PenofJen did a question post the other day, what brings you comfort. All I could think of was Subvet. He can make me laugh when all I want to do is cry or scream. He's 6'3" and I'm 5'5" which means I can get totally lost inside his huge hug. We can communicate across a room without words. He spoils me rotten.

So, what did we do for our anniversary? Well, we had a hard time deciding if we wanted to go to the pistol range or go see Harry Potter and the Order of the Phoenix. We saw the movie, and it's a good'un. We'll go shooting sometime soon.

When we got married I told him that we would try it out for 60 years, then decide if we wanted to make it permanent. So, 8 down 52 to go. I'm looking forward to each one.

So now for the pictures *sigh*. 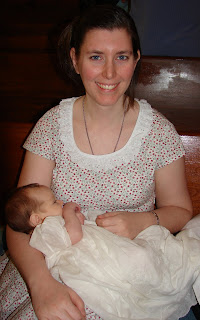 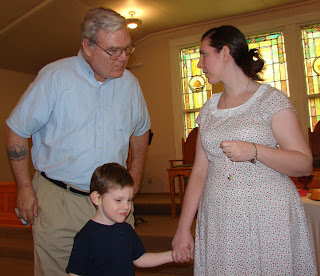 These were taken at Sugars' baptism last May. The dress she's wearing was Subvet's baptism gown. All 3 of our kids have worn it. The dress I'm wearing I made 4 years ago for our 2nd wedding. Subvet went back to Catholicism so we had to get married again by a priest. I get asked periodically if I'd still marry him were we to be able to go back and do it all over again...surely after doing it twice already that question's been answered.

Email ThisBlogThis!Share to TwitterShare to FacebookShare to Pinterest
Labels: meme

Glad to see a picture. Always nice to put a face to the words :o)
Susan

And what is wrong with those pictures and the subject of them? They are perfectly lovely and so are you, my friend. :-)

And it is nice to put a face with your "voice".

I revealed *me* on June 10, 2007 on mcbenningschool.blogspot.com

I have the disease that is remedied by being 6-7 inches taller!!!!
So I am responding to the challene in retrospect.

BTW we are having family portraits done soon for Bill to submit with pastor resume. so I will have the whole gang!

Of Course Bill and the kids are peppered throughout the blogs, as they all are the *right* height!
Jen

thanks diane you're too sweet.

jen, just what is the *wrong* height??

I love your pictures!! You look really pretty in your dress. I know how you feel, though, after 5 kids I am not to thrilled with how I look in clothes either, but, we have those adorable kids to show for it, right??? I scrolled through your blog for a bit, and your children really are adorable. Our youngest was also baptized last May.

great pics MM! I love to see pics of my blogging friends... it's nice to put a face to the blog!!

You look pretty and happy :)

Hi Mightymom,
Thanks for stopping past my blog and leaving your comment. I have glanced around your blog and think it's great!! I love all your photos, specially the photo of you and your baby, you look so happy!!
I am new to the world of blogging, but already think it is so much better to be able to put a face behind a blog.
Enjoy your children as much as you can before you know it they will be adults themselves.

Hi Mirre and Melinda!! Thanks for coming by!
Mel, I'm pretty new to blogging myself. I've been at it less than a month. I've found that I love it. It beats the lonliness when everyone's asleep and I have insomnia!!

Come back, I LOVE comments!!

A belated Congratulations! wish to Sugars and her family!