go here to see all the lovely show and tells!! 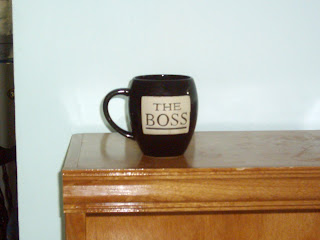 Well, I've seen a lot of you fellow bloggers doing a show and tell. I thought I'd join in the fun. Here we have Subvet's coffee cup. You'll notice it says "The Boss"

Now for "The Rest of the Story"

I bought him that cup. He always tells the kids, he's the boss, after all it says so on his coffee cup. Of course, he also says that he's only the boss because I said he could be! There are days when I threaten to take the coffee cup away. :-)

He's recently given me my own category on his blogroll "SHE WHO MUST BE OBEYED." It's no wonder Sonshine says "Mommy's da man."
at 2:54 PM

Email ThisBlogThis!Share to TwitterShare to FacebookShare to Pinterest
Labels: Funnies, show and tell

Don't confuse the child :o) Decide who is the boss and stick to it!!!!
Susan

Your other blog is extremely homey. Makes one feel cozy & comfy.

what's the matter, chief? Not feeling cozy tonight? Hey, thanks for the writeup. You're my new ad exec. Corner office and everything!

Cute cup, I am with Susan though!

Did you ever see the show in the 90'S that was people dressed as Dinosaurs? I can't remember what it was called, but the baby always called the Dad, Not the Mama! That is what this makes me think of, *smile*