Please watch where you pee. 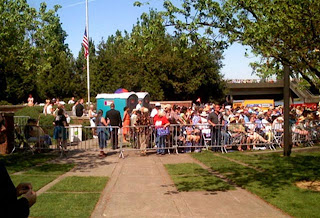 Earlier this month, 75,000 people gathered in Waterfront Park in downtown Portland to hear Obama speak at a pre-primary rally.

Officer Thomas Brennan, a seven-year veteran with the Portland Police Bureau, said he was happy to help at the rally after being called in on his day off.

"On short notice, a lot of people had to cancel trips. But they were glad to do it," Brennan said. "It was very memorable, in more ways than one."

Brennan, who controlled the crowd near the Portland Police Memorial, noticed several Porta Potties set up in the middle of the memorial. Brennan had been at the site five days earlier for an annual memorial service and a flag was still set at half mast on the day of the rally.

"There was plenty of room elsewhere so space wasn't an issue," Brennan said. "So someone used some really poor decision making, whoever elected to put them there. I mean, it's somewhat hallowed ground, I guess you could call it."
at 12:28 AM

Yupper Sarah...I read this yesterday...so most of my anger and contempt for anything to do with that man was spent then....

These people are dummer than a sack of hammers.

Are people really that incredibly stupid? Who on earth would have ever said "hey, set those up over there in the middle of that memorial!"

Well what do expect from a guy who's pastor of 20 years says, G-dDa__ America. Or from a man who says our soldiers are bombing and killing innocent women and children. Which I am happy they do. His Freedom of speech is protected and he uses it to show the American population just HOW STUPID HE IS!