Show and Tell (Part B)

So, I will show you the making of my first batch of Mama's Sauce! 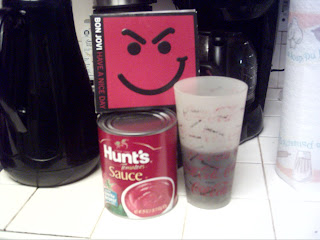 The Dr. Pepper and Bon Jovi are my secret ingredients!
The chorus to the title track of this album says

"Oh, If there's one thing I hang onto
That gets me through the night
I ain't gonna do what I don't want to;
I'm gonna live my life
Shining like a diamond,
Rolling with the dice
Standing on the ledge,
I'll show the wind how to fly
When the world gets in my face,
I say...
Have A Nice Day!
Have A Nice Day!"

aaahhh, some days the rebel comes out ya know? 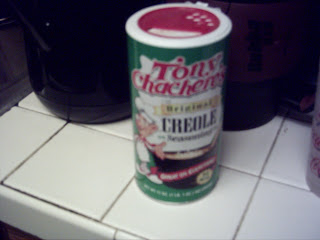 This goes in almost everything I cook, along with garlic and Lea & Perrins. 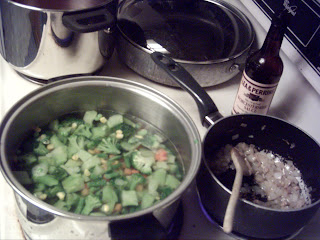 the front burner has mixed vegetables and broccli coming to boil, the back burner has an onion and garlic sauteing in butter. Lea & Perrins stands at the ready.

Well, now I know how to make fake vomit! Mixed veggies and tomato sauce in a blender! I mean it...at various stages of the puree this was positively revolting!

For Mr Alligator to eat it, this had to be as smooth as ketchup. He'll pick out anything he can. Therefore I spent some time at the blender. I actually dumped the whole thing in 1 pot, the took about 1/3 blender at a time and pureed smooth, then put into a different pot till there were no chunks anywhere. 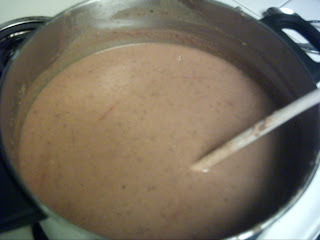 Then I started seasoning it. I kept taking small cups out to the boys as I'd go and kept at it till Gator would eat it WITHOUT grimacing.

I divided this in 3 parts, froze two of them and we're eating the third. 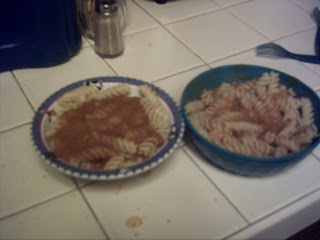 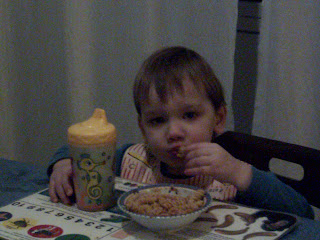 Veggies in every bite. You just can't beat that!! Next week I'll braise some chicken legs in it and see how that turns out. Basically this can be used just like you would Barbecue sauce.

Cook veggies till tender then drain, saute garlic and onion in butter till soft.

sugar cuts saltiness...and vice versa.
Tony's is the best, but it has a fair bit of salt in it so don't add any other forms of salt (garlic salt, table salt, etc) without taste testing.

Once all was said and done, I let it simmer on the stove for about an hour or so, stirring regularly. This helps to blend all the flavors into one sauce and makes it better overall.

So, there you have it folks. Works for me! It took quite a bit of doing though, however, just knowing that he's now eating veggies again was more than worth it! Once he's old enough to understand we'll go to the "you don't get down from the table till you've had some veggies...and no I won't bring you a pillow!"....but till then here we are.

Scroll down for Show and Tell part A and don't forget to place your entries in Thesaurus Thursday for a chance to win one of the prizes!
at 3:51 PM

Email ThisBlogThis!Share to TwitterShare to FacebookShare to Pinterest
Labels: recipe, show and tell

Good job mighty mom! I might have to try this sauce sometime. :)

Tah Dah!
You are the bestest mom ever!!! I mean no chunks and you still gave a healthy food???

I am going to try this, but modify only a tad...No Broccoli for me(unless it is raw)
hippy...who forgot to log in...you KNOW me!

What a clever and hard working mommy! Thanks for sharing your sauce recipe. Blessings, Q

You ROCK! When they're much older you'll have great stories to tell.
Hey, you should market this, you could make millions....and take me on a trip!

Ms Pink, you're the 2nd person to tell me to market Mama's Sauce, but I have no idea where to start, and am not sure I have the energy to follow through.......

am thinking on it

I've missed being around. Hopefully I can be back more in the future:o)
Susan