For the record. I don't care for Halloween much. You can read why and how we make it more fun here.

That said and explained, we looked quite cute Sunday night!

First up our two cats. 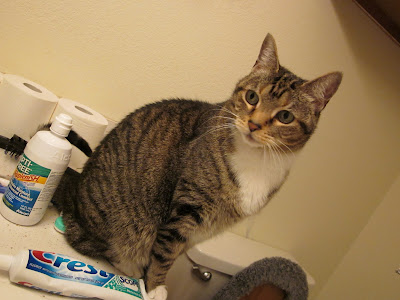 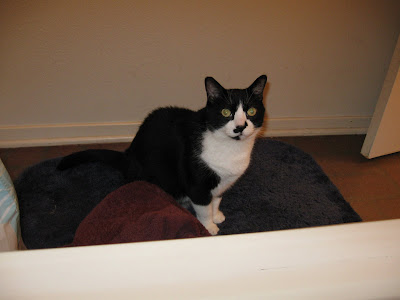 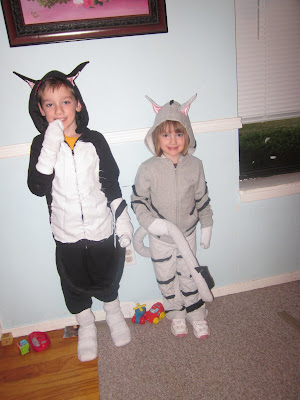 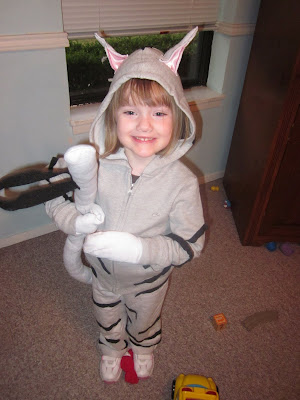 To the grey sweats and hoodie I loosely hand sewed felt "stripes". I had an old grey sweatshirt I'd cut a sleeve off of years ago, and used the other sleeve to make the tail and ears. The ears are 2 tall triangles of grey sweatshirt (and black felt) sewn together, with a triangle of pink sateen from my grandmother's stuff in the front then hand sewn on the hood. The tails are stuffed with a left over bag of stuffing I had lying around. 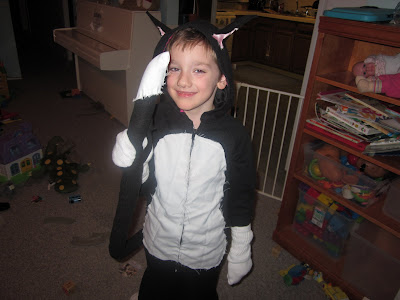 To the black hoodie I added a white tummy, made out of scraps from a pair of my grandmother's double knit pants. (yes, the woman [and I] saved everything!). The tail is made from black felt that I had left over from previous years' costumes. with more white knit at the tip. As the night wore on the knit frayed quite a bit making it look very "furry"

each tail had a felt strip sewn almost to the end that they could hang on their wrist to keep from tripping over it. 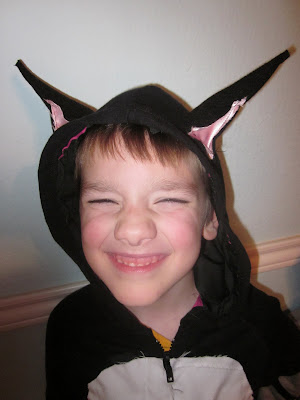 I added some of my all white socks over their hands and shoes to complete the outfit. I would've painted whiskers but these two won't have their faces painted. 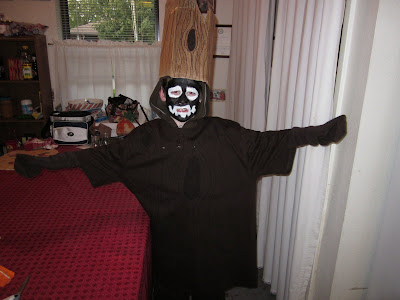 Next we have our "Spooooky tree!" which, after the first two little kids were too scared to come and get candy from him (we had to send Mr Cat down the driveway to give them some!) He changed his name to "The SCARY tree!" ;-)

must've been pretty scary, none of the little ones would take candy from this guy!
the older kids loved him though! 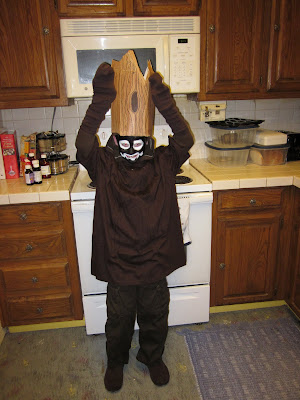 To make his costume I bought him a pair of brown pants and a brown hoodie that will again be worn throughout the winter. I then bought a men's large brown tshirt ($5) and a package of men's brown dress socks. I turned a large Goldfish box inside out, cut it jaggedly at the top, and colored it with markers and crayons. If you ever want cardboard to look like wood: take a brown crayon and peel all the paper off of it, lay it flat and color across the cardboard. The texture in the cardboard will show the crayon and give it a LOT of texture! Add some brown marker here and there for a variegated look, then with a black sharpie draw your knots and texture lines. HINT! after you've drawn with the sharpie, take your crayon and color hard OVER the sharpie. It will blur the edges and make the whole thing look a bit more woody. 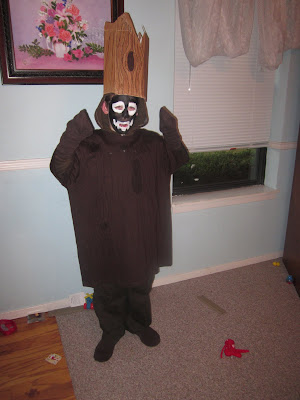 Then I took my sharpie and drew knots and texture lines on the t-shirt. 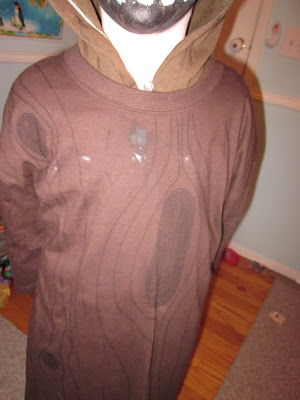 brown socks (that later were given to Dad) over the hands and shoes, painted face, and voila! a scary tree! 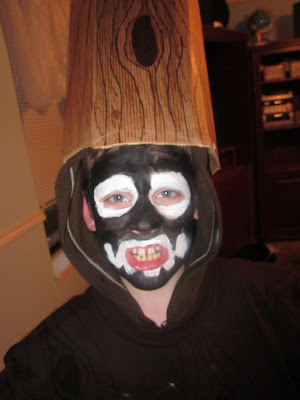 The brown hoodie has a big design on it that's covered by the tshirt, and the black one is a girl's hoodie with a sparkly heart design on the front that's covered by the white tummy, the inside of the hood is also a bright pink and purple striped that I covered with a piece of black cloth. So don't be afraid if you can't find exactly what you're looking for in making costumes. Many times things will work anyway, and they don't have to know what section of the store you found it!!

Because I mostly used either things that could be worn again, or things I already had lying around the house, the total I spent on this year's 3 Halloween costumes is the $5 for the brown tshirt!! And the sewing I did was MINIMAL.

here we are.....waiting for the kids to come! once it got dark we went and sat on the porch. 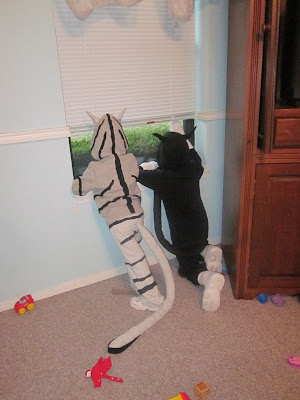 it was so much fun for the boys and I, Sugars decided she wasn't interested in the kids and spent the evening indoors with Dad.

And we have 3 bags of our favorite candy left over, so fear not, we're not deprived by not going house to house!!

How was your Halloween??

Excellent job on the costumes - the kids look terrific!! You really are a whiz with a needle, ya know that??

I Love Love Love the idea of the costumes looking like the family cats. You are one amazing mom.

How clever are you! Fantastic outfits, I'm sure your two little dress up cats are proud of their creative clever Mum!

You are one creative lady! Love these costumes! And LOVE that the hoodies and sweats will do duty the rest of the winter!

I can't believe how creative you are, not only that but you got it done, and for peanuts. Speechless in awe and admiration.