So, Sonshine is studying habitats in science at school. Part of this is his first 1st grade project. He is supposed to decorate a shoebox representing the habitat of his choice from the 4 they're studying.


Now, according to Wikipedia, the difference between a rainforest and a jungle is the undergrowth. When there's a thick canopy of leaves overhead no light gets to the ground so there isn't much if any undergrowth. Where this canopy thins or is damaged light reaches the ground allowing for thick undergrowth called a "jungle".


Since I happen to have a good friend "Jungle Mom" who lived in the jungle/rainforest of Venezuela for 20 years as a missionary to the Ye'kwana tribe I actually have learned a fair bit about jungle living. At least as much as I care to learn because jungle life AIN'T for me!! I got her permission to use some of the pictures from her website along with those found on the internet and Sonshine and I went to town making his box!


First I took the fabric that I'd used to make the curtains and crib skirt for my kids' nursery and covered the outside of the box. 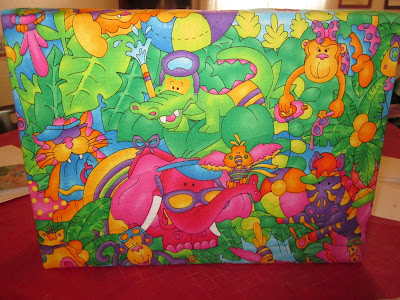 This is the overall inside view. In the background is Jungle Mom's Ye'kwana village. Then from upper left clockwise you have a 3 toed sloth, a red howling monkey, a fake coral snake, a blue poison dart frog, a silver backed gorilla, a tomato frog, and an Emperor Tamarin. The sloth and the howler monkey are in honor of Jungle Mom as she's talked about them many times. 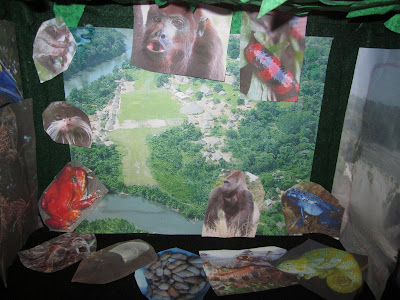 In this shot you can see the fabric "tree leaves" that we cut out and glued to the top of our box. 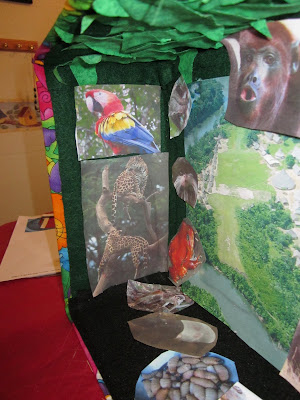 On the left side here you have a macaw and 2 jaguars. Jungle Mom has told us about keeping macaws as pets and scary encounters with jaguars! 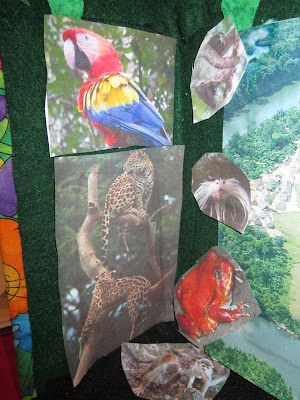 Down here on the bottom, with one (and only ONE) exception, is where Sonshine chose to put some of the different things Jungle Mom has talked about EATING in the jungle! Can you guess what the exception is?? **leave your guesses in the comments!**

from left to right there are: squirrel monkeys, tapir, palm grubs, crocodile, and a Calumma Parsoniia 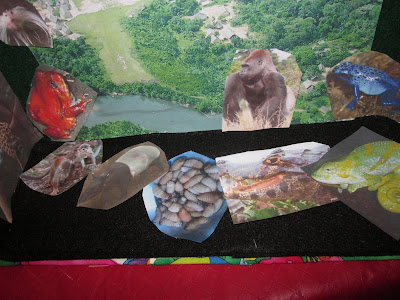 On the right side is a portion of a picture Jungle Mom has of a gorgeous waterfall in the middle of the jungle. You can see the whole picture at the top of her blog. 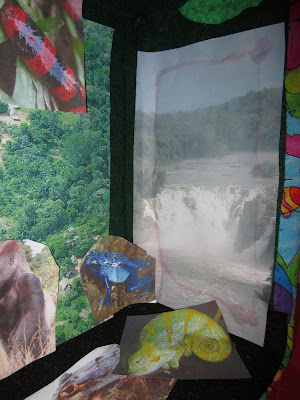 So, many many thanks to Jungle Mom for being my bloggy friend these last 4 years. As you can see, I've learned many things from her! And boy was this an easy and fun project made so much richer for both Sonshine and me because of her friendship!
Here's a link to all her posts about life in the jungle! Go on over and tell her hi.
at 9:06 PM

OH! Tell Sonshine I am so honored he chose the rain forest! My rain forest. This is a keeper! MM, I can hardly believe it has been 4 yrs!!! Just thinking of you and Sonshine working on this makes me feel so special!

Sarah, What a beautiful project. You and Sonshine have done a great job. This is at least B+ material and should really be an A. Good luck to Sonshine and kudos to you for having such a wonderful friend in JungleMom.

Looks like a fun project made special for sure. Hats off to Sonshine and you for putting it all together...

I'll bet that was fun to put together! Good work, Sonshine!

I always feel like I'm the only guy on this site! Having stated my manly position I think the box is GREAT! The brilliant colors show imagination. I would love to have a room in my house done like that. It could be the bed room of course I would never sleep!