Well, the day started off great....but we had some trouble at the Carnival.

Which is why I didn't get very many pictures.

I mean to tell you it was too loud for my hearing impaired husband!


It was too loud to hold a conversation with the person standing next to you.

It was too loud to get your kids' attention when they were drifting away from you.

It was too loud for me. It made my ears ring and hurt and gave me a headache within minutes of arrival.

And it was too loud for my 3 yr old to tolerate. She screamed from the time we started walking to the Carnival and the music started till Subvet got her away from the noise. She ended up spending the whole time sitting in the car with Subvet.

I thought the boys and I would take refuge in the building where it would be quieter....but you had to walk around the stage and speakers to get to the only doors that they had open to the building.

Once we finally made it inside the boys got to do the one thing they'd been waiting for all year! 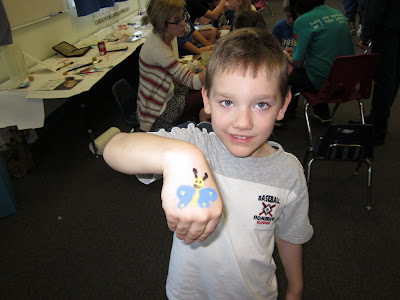 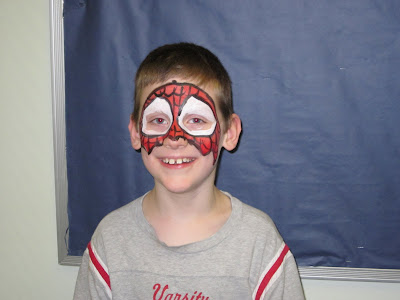 Ahhh yes, nothing says joy like a butterfly on the hand or a spiderman face!

You should have HEARD this kid telling the poor girl how to make a spidey-mask!! Bless her heart, she had no Spidey picture to go from...wasn't well versed in what the web-slinger looks like and was sooo nervous Sonshine wouldn't like her art. She took a pic they had and was trying to adapt it to fit the cause. Of course, Sonshine was sitting there giving her EXPLICIT instructions on what he wanted his Spidey-face to look like!! I'd let Sonshine get started without me since he's known what he wanted painted on his face for about 9 months and was helping Gator pick a design. By the time I got over to check on Sonshine the poor girl was breaking out in a sweat!!

She did a great job! And Sonshine was so tickled with it that I almost couldn't get him OUT of the bathroom where I'd taken him to have a look.

Then came our FAVORITE part of the Carnival!! We went on a hay ride! around the parking lot and large empty lot next door. We were far enough away from the music that we could actually enjoy it and totally thrilled with getting away on a tractor pulled trailer weaving through the trees for a bit. By next year we'll have built a new building on this lot and I don't know if the hay ride will be available...which is sad as it really was our favorite part!! 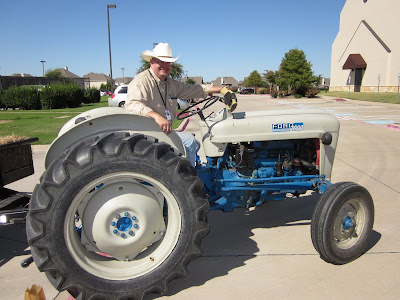 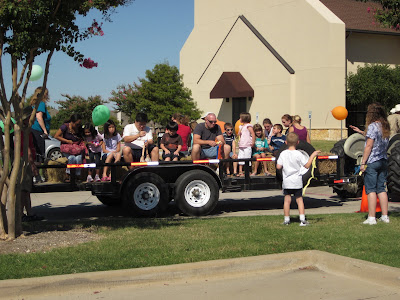 What is it with those church parties? They want you to come and socialize, but you can't because the music is so dang loud!!! Can you tell we had the same problem at our church (indoor) picnic?

I don't know but next year I'm taking ear plugs for all of us!!

Ooh my looks like you had a grand time!!! Yes, hayride!!! They are fun! Wishing you well! Cathy

Have your ears stopped ringing yet. What's up with loud music anyway when it's not even a rock concert?! :0)
The face paint looks great...

Sounds like a wondeful time, other than the loud music.

Back today to let you know I linked you to the Adventure Tour Express! Have a grand day! Cathy

Don't ya love those outings that become a tradition? The kids come with a mental checklist -- and nothing better be missing! Hope they figure out a way to have the hayride at the carnival next year! And maybe someone needs to complain about the music! Sheesh!

Don't ya love those outings that become a tradition? The kids come with a mental checklist -- and nothing better be missing! Hope they figure out a way to have the hayride at the carnival next year! And maybe someone needs to complain about the music! Sheesh!

It looks like a fun day even though it was loud :) Perhaps you should talk t the organizing committee about toning it down next year?
Happy Adventure Express Wednesday!

That is bad about all the loud noise. Maybe you can call an organizer about that so they can tone it down next year?

Sorry for the duplicate comment ...it didn't seem to go through the first time!

How fun! The face painter did a terrific job! :)

Poor kid--I'm noise sensitive, too, so I can appreciate all of that over-stimulation. At least she got some one-on-one time with her daddy :)